How To Avoid Overcooking Your Chicken

We’ve all overcooked chicken at one point or another. Chicken is simple meat to cook, but it’s also fairly easy to mess up.

Luckily, you can avoid overcooking your chicken once you identify the factors that lead to it happening. Once you do that, you should have perfectly cooked chicken every time you fire up your grill.

In this article, we’ll pinpoint the main causes of rubbery chicken thighs, breasts, legs, and other cuts of meat, and we’ll go over a few of the best ways to prevent your chicken from overcooking.

Is it okay to eat rubbery chicken? That’s a common question that pops up due to how easy it is to overcook it. The answer is yes, but it’s not nearly as pleasant as properly cooked chicken.

Overcooked chicken is usually very dry and difficult to chew. In fattier cuts of chicken meat, it can feel as if you’re chewing on a tire. The color also changes. Instead of being white and vibrant, the meat can look dull and almost yellowish.

However, it is perfectly safe to eat. It just doesn’t taste very good, and the texture is atrocious.

There are a few key factors that cause your chicken to overcook. Here’s a detailed breakdown of each factor.

Cooking It For Too Long

This should be obvious to most people. It doesn’t take very long to cook chicken when you prepare it properly, but a lot of people cook it for a lot longer than they need to because they fear salmonella. Once a chicken breast is properly prepared, it only takes a few minutes on each side to fully cook it. If you’re a little hesitant to eat chicken that is cooked quickly, buy a ThermoPro Instant-Read Meat Thermometer. You should probably buy one anyways. You don’t want to eat raw chicken anymore than you want to eat overcooked chicken.

A sudden change in the temperature of your grill or pan can zap all of the moisture out of your chicken very quickly. You want to cook it at a high temperature, and you want to maintain that high temperature throughout the cooking process. Mistakes happen sometimes, though. So, we’ll provide a few tips that will help you save your dried out chicken later on in the article.

Dryness On The Surface (Especially With Skinless Chicken)

However, when you’re working with skinless pieces of meat, there isn’t anything protecting the meat while it cooks, and it loses a lot of its moisture. The moisture just pours out of it as it cooks. That’s why you have to prepare it properly, and you have to cook it quickly.

How To Keep Chicken From Being Rubbery

Here are a few tips that will help you cook your chicken properly.

Before you ever start cooking the chicken, you have to take the time to properly prepare it. With boneless and skinless pieces of meat, there are a few steps that you must take.

First, boneless meat is never one thickness. There are fatter parts, skinnier parts, and parts that are just weird. You want to even the meat out before you cook it. The most basic way to do this is to remove the tenderloin from the breast meat, and then pound the meat until it’s all one thickness. There’s a more advanced way of doing this that we’ll talk about in a minute.

If you’re using a cut of meat that isn’t from the breast area of the chicken, you can split it, and then you can lay it flat. That usually isn’t necessary if you follow all of the other steps properly.

Whatever you do, you have to pat the meat dry with a paper towel before you expose it to the heat. It won’t sear properly if it’s soaked in fluids.

This is the more advanced method we were talking about. Paillards are essentially cutlets, and they’re very easy to make. So, don’t let the fancy French term intimidate you.

To make paillards, you just remove the tenderloin, split the breast into two pieces along its seam, and then pound each piece with a meat tenderizer. That will create thin pieces of chicken meat that can be cooked within a matter of minutes.

Cook The Meat At A High Temperature, And Cook It Quickly

You want to get the chicken in and out of your grill in as little time as possible. You don’t want it sitting around after it’s already cooked, or it will dry out.

To do that, you want to cook it at a very high temperature. That’s usually the exact opposite of what you want to do with a grill, but it’s necessary when you’re cooking chicken. Don’t forget to check the meat’s temperature after it has rested, though. Undercooked chicken can be deadly, and that’s a lot worse than rubbery chicken.

How To Moisten Dry Chicken

Let’s say that you messed up an entire batch of chicken. Can you fix it? Well, of course you can. It won’t be as good as it would have been if you had cooked it properly, but you can salvage slightly overcooked chicken meat, and you might even be surprised by how good it tastes after you moisten it up.

Bathe It In A Soup

If your meat is really dry, you can let it bath in soup for a while. Of course, that’s probably not what you want to do if you’re grilling, but it’s better than wasting a bunch of chicken.

Letting it sit in a simple chicken broth for a little bit will make it more moist and enjoyable, and it’ll enhance the flavor quite a bit. However, you can take it one step further if you’re okay changing your dinner plans. Just turn it into soup meat entirely. Add carrots, potatoes, and anything else you want to your chicken broth, and then put the chicken in.

Use A Simple Sauce

Sauces are great for masking bad textures and flavors. If you dry out your chicken, you can easily serve it with a simple honey mustard or buffalo ranch sauce. The sauce will make it feel a lot better in your guest’s mouths, and it’ll make it taste better. However, it’s just an artificial enhancement. The actual chicken will still be dry. It just won’t be as noticeable.

Overcooking chicken is very easy to do. So, don’t feel embarrassed if you do it every once in a while. However, you’ll greatly reduce your chances of overcooking it if you follow the tips in this guide. Don’t forget to pick up a ThermoPro meat thermometer from the following recommendations, though. While having delicious chicken is great, you have to make sure it’s safe to eat. 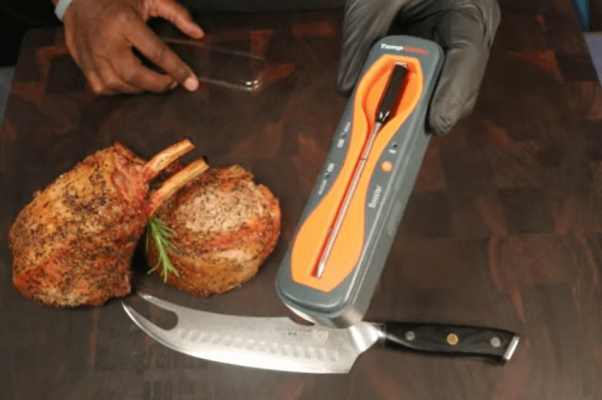