ThermoPro TempSpike Bluetooth grill thermometer monitors your cooking from 500 feet by using the most stable radio frequency available on the market. Equipped with a pair of advanced heat sensors, this digital meat thermometer can track cooking temperatures both inside &amp; outside your food. Enjoy 100% wire-free cooking and the convenience of no-hassle setup! As the smart choice that edges out the competition, it is a must-have for ovens, grills, sous vide, BBQs, smokers, rotisseries, and more!

EXTRA 20% OFF* - USE CODE: 20RD1OXV AT AMAZON CHECKOUT OR CLICK THE LINK BELOW

*receive 20% through link (if not opening on mobile Amazon shopping app, please use link on a desktop computer OR use coupon code at Amazon checkout)

*receive 20% through link (if not opening on mobile Amazon shopping app, please use link on a desktop computer OR use coupon code at Amazon checkout)

Such a good tool! Few things I love : 1) the graph, it’ll graph the temp and then… give you an estimated done time! 2) it has a charger base, and BT ‘extender’ which lets me move inside while my grill is on the porch. 3) many settings for different meats and done-ness. 4) its easy to pair.and 5! Its app does NOT require location services! So many of these require that in the app. This is not the case. TempSpike is the app – works well!It’s a small device, so it fits easily in most meats.no wires so nothing to catch one in the grill. even works under tin foil, inside my oven!fantastic, love it.

So this Temp Spike presents really well in the box you see in my pics. It charged quickly. So I tested the accuracy with an ice water bath and it slowly went to 32 deg. It did take a good couple or three min to register at 32. But it’s apparently pretty accurate after given the time to acclimate. This would likely not be a big deal if your intention is to start this out cold in, say a pork butt in the smoker. You would not want to use this as an instant read to check a steak or chicken. The app is straightforward, intuitive and easy to navigate. Overall, I really like this thing. The only thing I’m not thrilled with is the size of the probe itself and the fact you have to very nearly bury the whole thing in your meat. There is a line to indicate how far to bury it. Just be sure your meat is thick enough to bury this and it still be in the center of your cut. Other than those couple things, I love this idea that one probe will measure internal and also ambient together. That’s so much easier to deal with and then to be wireless also is like every grill master’s hope. The app interface is neat and attractive with the information you need displayed right in front of you. Also really cool is this probe immediately connects to the phone/app. No waiting or re-pairing. I tried to test the limits of the connection to this probe and walked over 150’ away which is about the limit of how far I’d roam away from my grill were I grilling. Still strongly connected according to the connector indicators. I used to use the igrill but the connection distance was horrible. Couldn’t even go into the house before it disconnected. But this one was steady. I have only really put this through the paces I’ve described here. I have not actually smoked or grilled with it yet but have no doubt it will perform as it should. And should it not, I’ll come back here to tattle on it. 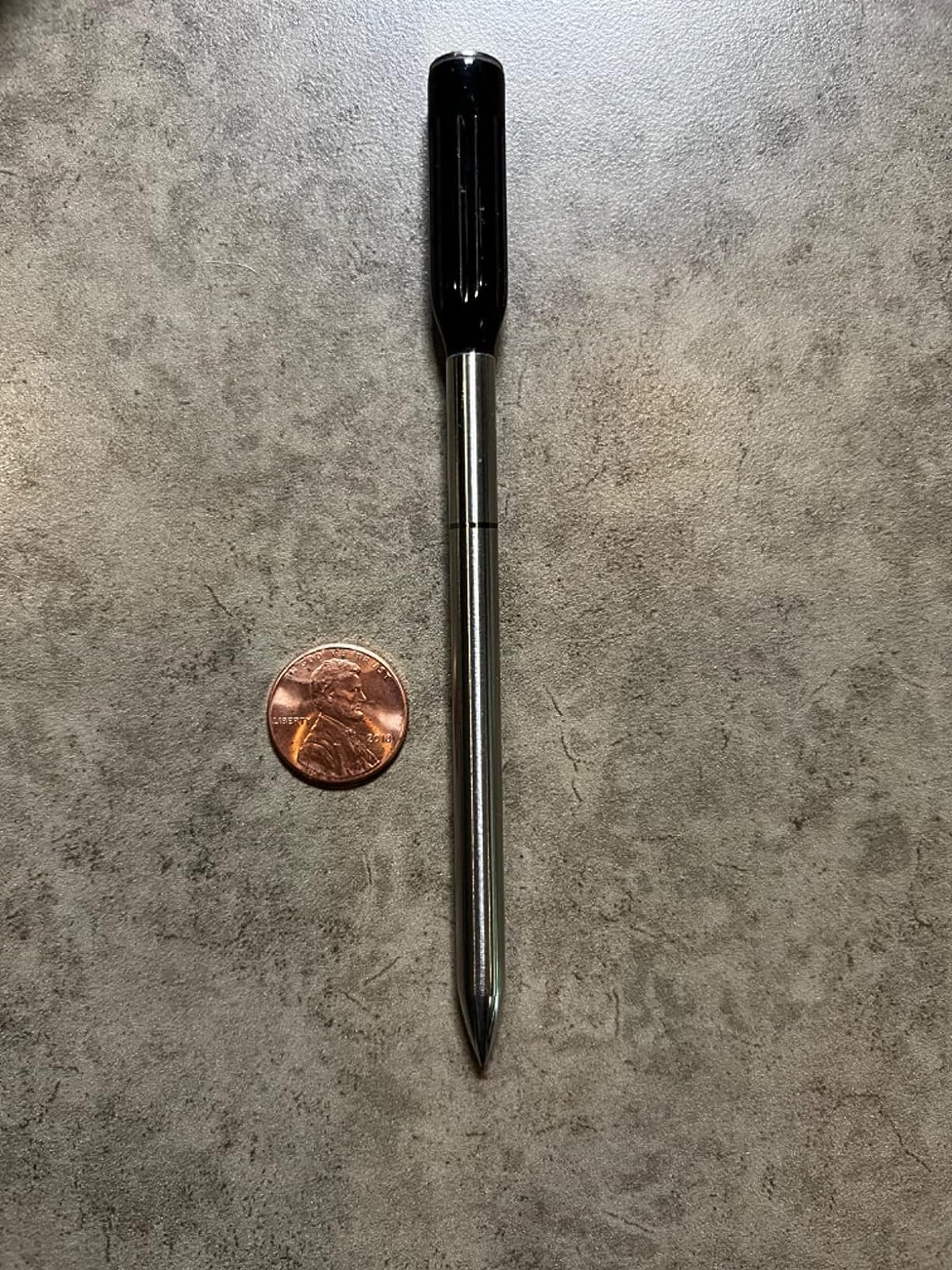 This thermometer is so easy to use!! It is my secret for perfect BBQ. I love that it’s app connected and doesn’t need a wire.

We used this probe in our smoker to make some pulled pork. We downloaded the app and it was very easy to use. It had a lot of presets for safe food temps based on what you are cooking. It also had a central Bluetooth extender to increase the range. We were running our smoker at 225 and suddenly the app started beeping loudly. I checked and it said my smoker was pulling up temps of over 400. Turns out there was a flare up. I would not have noticed it otherwise. I also used the probe in the oven today to make chicken and it worked great in there as well. We compared the temps to another thermometer and it matched perfectly. I highly recommend this probe.

I’ve owned every step of the progression of BBQ thermometers, from the round gauge on the grill lid itself to the round gauge that you had to put the probe in the meat and took a few seconds to measure, to the evolution of instant digital readings and more recently before this one a “wireless module” that was wireless in a way that you could pair it to your smartphone, but still had wired probes and a central module that had to be outside of the grill/oven.While i had seen this type of completely wireless probes it is the first one that i actually own and i must say that this is a gamechanger for me.Being able to read the ambient and probe temperature in real time means that you can act on how you want to cook your meat. No opening, pinching and closing, repeat, repeat, repeat until, yes it went over the temperature you wanted.The range extender works great and charging the whole system is as simple as it gets.The app is very well designed and user friendly unlike some of the cheaper products that using the app becomes a chore as bad as pinching the meat 10 times until you decide its on the temperature you want.I wish two probes were included for two different meats on the grill, although you can get reference on the temperature of one relative to the other, while it is not exactly accurate you have an estimation on when to start checking for that other piece.Overall i’m happy and a repeatable steak means that you’re on the way to perfection!

We bought a Trager last year and have enjoyed the ability to cook and smoke a lot of proteins. One of the issues with a Trager is that opening the lid can greatly impact cooking time. We’ve been using an instant read thermometer and it’s been ok, but when we switched over to the ThermoPro TempSpike we found that by not lifting the lid to check temp, we were getting noticeably better results. The spike is a bit high priced, but it earns its price tag with accurate temperature readings (which is huge, many probes I’ve tried have been off by a few degrees) paired with a solid app which was easy to get all set up and use. It’s not the least expensive way to get your temps, but for us, it has been a much better way.

I mean seriously, after thinking I’d mastered every trick in the book for checking how cooked meat was, who knew this little gadget would take all the guesswork out of grilling?!I’m not the best with e-gadgets, but this thermometer is incredibly simple to pair with my phone and use. Within a few minutes of setting up the thermometer and installing the app, I was watching the temperature in the center of a big cut of steak in real time. No more equating “hand tenderness” to how well done a piece of meat is!

I’ll start off by saying that my wife gave me crap for getting this because I have “too many thermometer thingies”. My response to her was “well, when you do the cooking, you can get rid of some”…yeah, I do ALL of the cooking.Anyways, back to this magical device. I have a few ThermoPro devices and they are always quality. Their warranty is great (and they actually honor it). However, this device is next level! I’ll explain why.BUILD QUALITYEverything is solid. Beautiful quality. Almost made me sad before I shoved the probe into some chicken.GREAT APPThe app makes it almost impossible to mess up meat. Look at the pic I posted. When you select what kind of meat you are cooking, it shows you exactly how to position the probe for best results. I’ve never seen anything like that in any cooking gadget app. I now want to try it on all the meats!AMBIENT/INTERNAL TEMPSIt is nice having the ambient temp, although I question its accuracy a bit. My oven is set at 400 and the ambient only reads 315F right now. I will have to test it with some of my other “thermometer thingies” my wife complained about.ESTIMATED TIME TO COMPLETIONWhat?!?! This was a surprise. After I shoved the chicken in the oven and set up the app, it started a countdown on its own. I’m assuming it takes the rate of change of internal temperature and does some magic calculation to give you a time remaining. Again, not sure how accurate it is, I’ll have to play with it more. Still a super cool feature!CUSTOMIZABLEI haven’t done a ton with the app yet, but it seems to be very customizable. One of the pitfalls of many other cooking gadget apps is that they are generally not very versatile. Doesn’t seem to be the case with this.EASY CONNECTIONI might have been able to do it while sleeping. Open app, give permissions (because they can go ahead and spy on my meat, I don’t care), add probe, done. It is almost TOO easy!Bottom line, this thing is the real deal. I know there are plenty of these to choose from, many more expensive. In my opinion, if you keep looking for a different probe at this point, you are crazy. Buy this thing now!!! 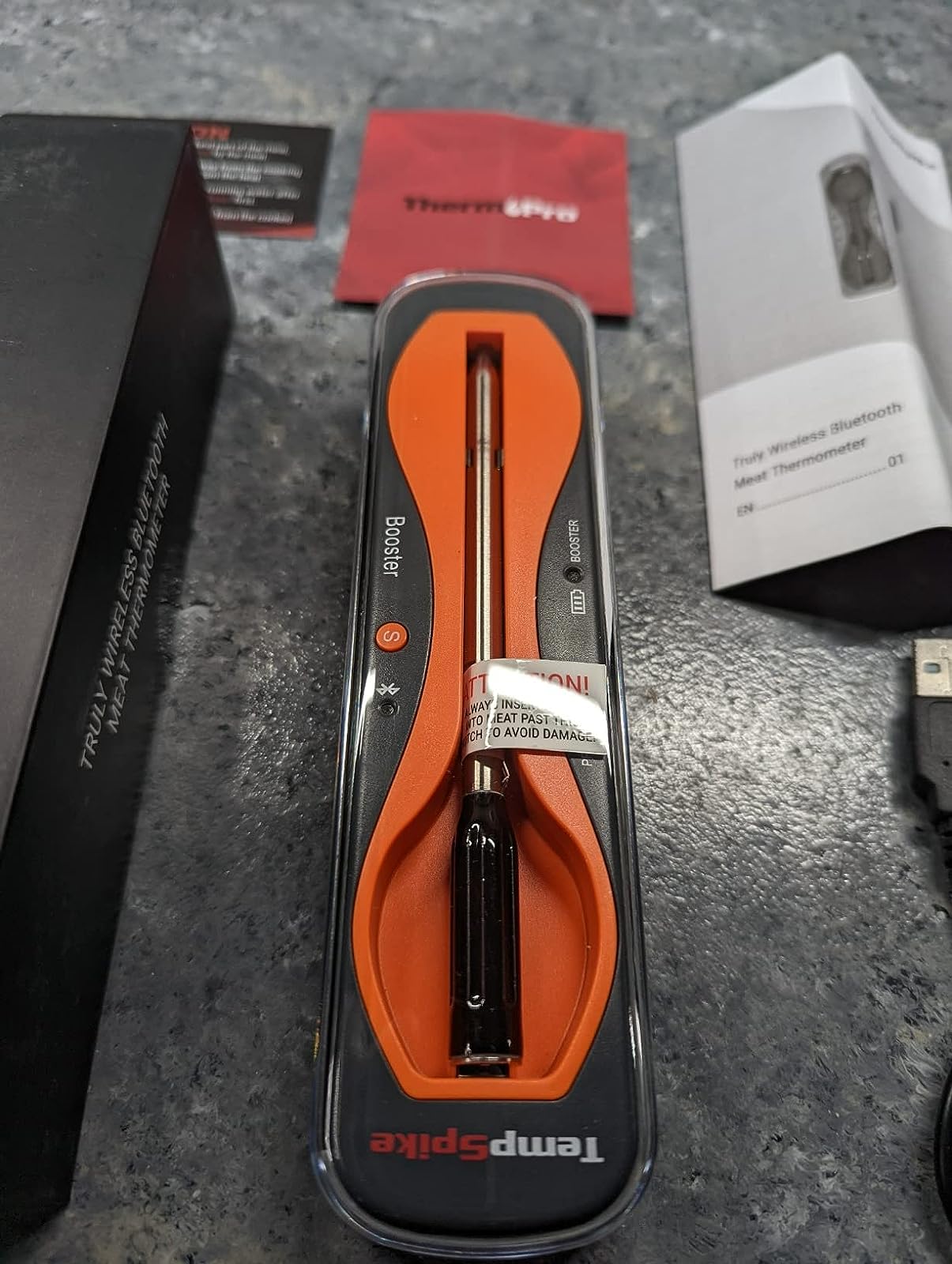 Easy to set up the distance was great was about to walk around the house and still get a reading.Easy cleaning and small enough to fit in any drawer.In app can be set up for any any meat TempsGreat product 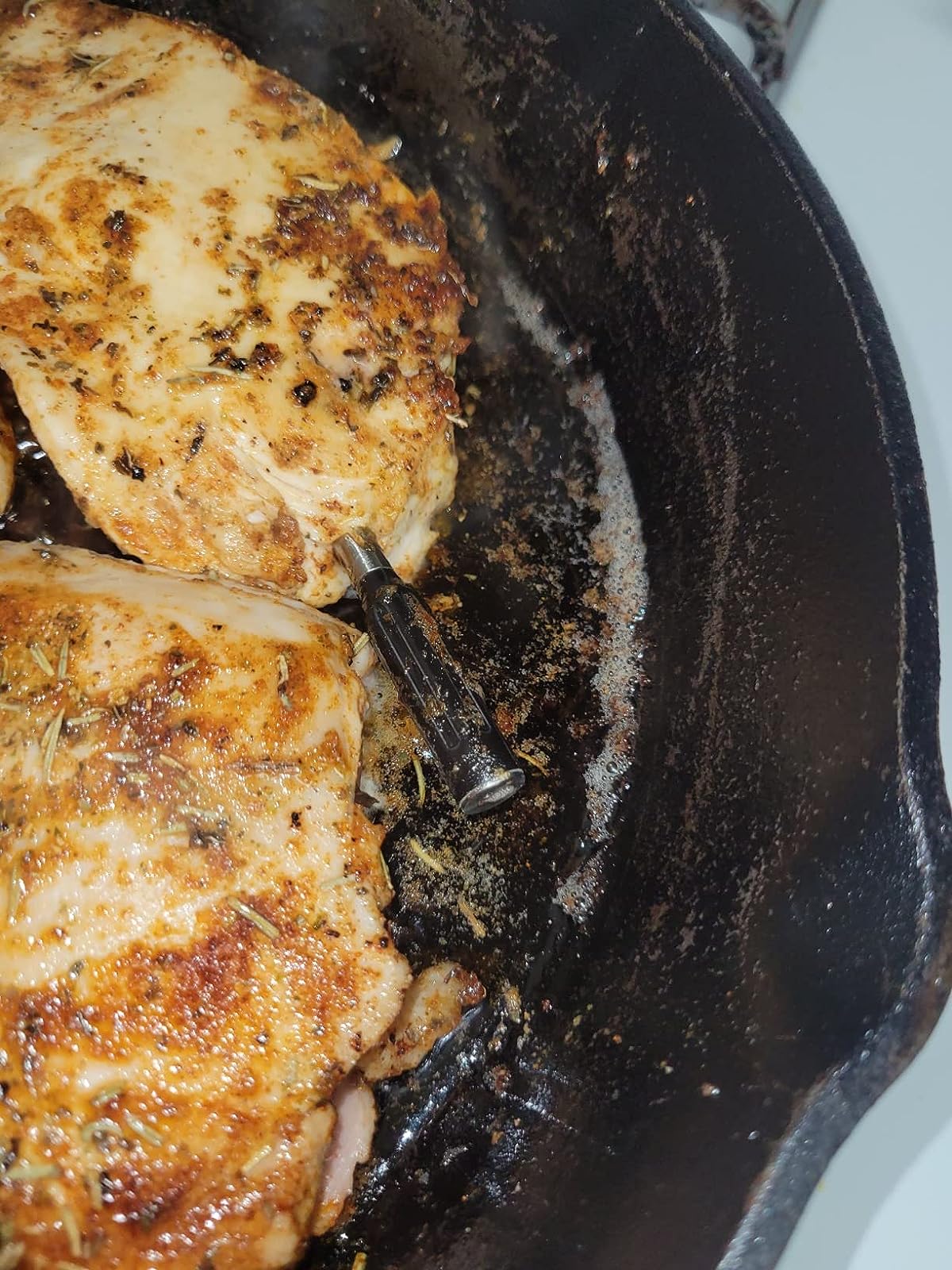 accurate readings, easy to set up and use, alarms are great, app is nice. blutooth range is good, wipe clean, stick it in the case and your good to go. standby battery is great, I’ve yet to run out of battery to comment on how long it lasts.

Easy to set up app and pair, the directions are very clear. I have instant read thermometers but being able to pair with your phone and have it alarm (alarm is loud!) when whatever you’re cooking hits it’s desired temp is next level cool technology!!! This thermometer is great because it’s literally a set it and forget it, freeing u up to join the party as opposed to always having to check on things. App is really cool too and intuitive.Tested: So an easy check of ambient accuracy was to have it out in room temp and it read exactly what my thermostat had. I cooked a whole chicken in my toaster/ convection oven and ambient was 10 deg off of oven preset but there is variation in ovens themselves so that was expected and the probe was pretty close to the heating element. I’m not too concerned about ambient temperature as I am internal and when the chicken was 165 it alarmed. Checked same spot with digital thermometer a few times and it was a +- 2 degrees…so very accurate and chicken turned out perfect! Next level thermometer that works as described/ intended. Def recommend!